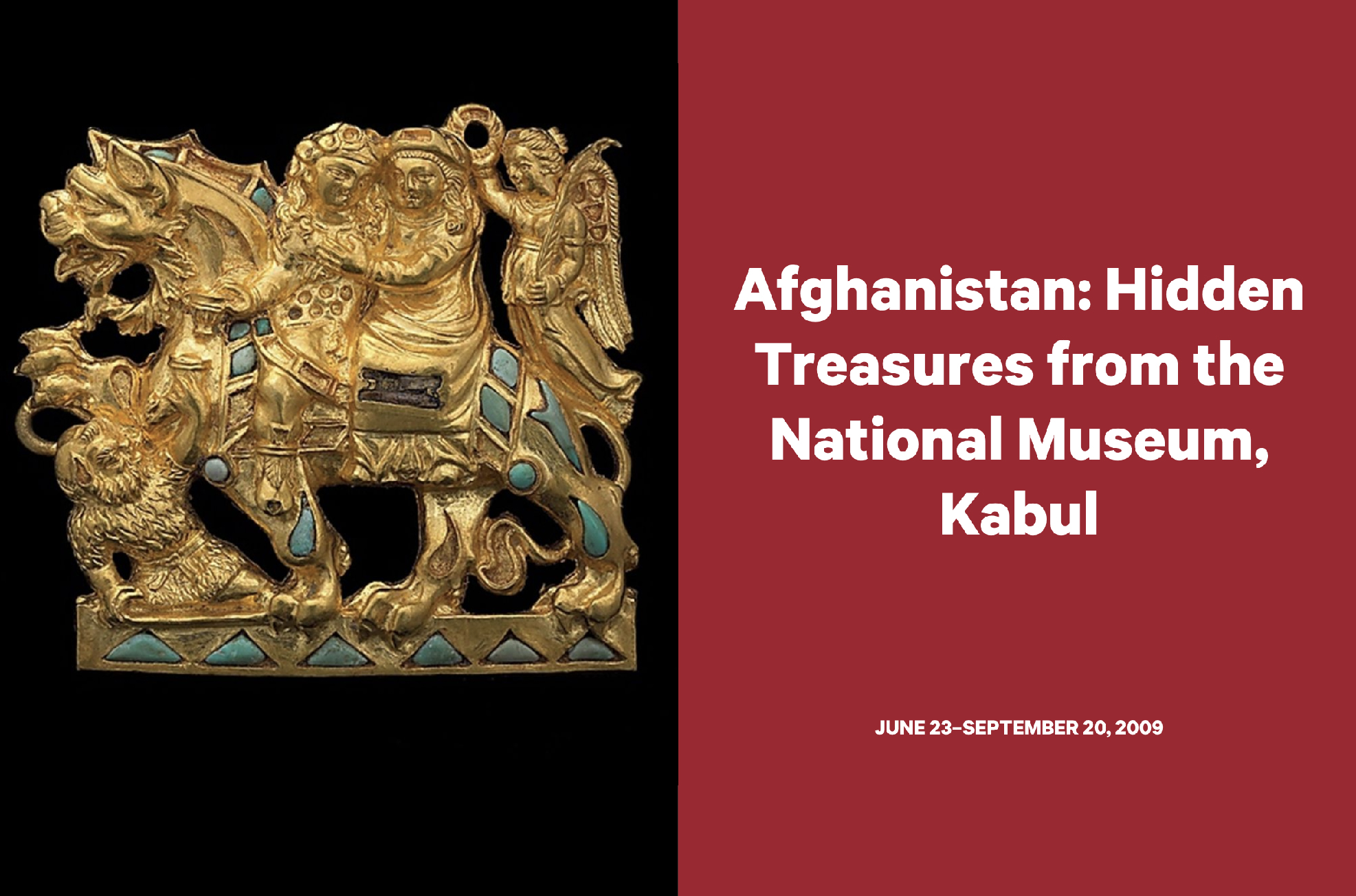 Ancient Afghanistan—at the crossroads of major trade routes and the focus of invasions by great powers and nomadic migrations—was home to some of the most complex, rich, and original civilizations on the continent of Asia. This exhibition celebrates the unique role of Afghanistan as a center for both the reception of diverse cultural elements and the creation of original styles of art that combine multiple stylistic materials—such as the Hellenized examples from the second-century B.C. city of Aï Khanum, the array of trade goods found in the first-century city of Begram, and the astonishing nomadic gold found in the hoard at Tillya Tepe, which also dates to the first century. It also commemorates the heroic rescue of the heritage of one of the world's great civilizations, whose precious treasures were thought to have been destroyed. Among the highlights of the exhibition are gold vessels from the Tepe Fullol hoard; superb works and architectural elements from Aï Khanum; Indian-style sculptural masterpieces in ivory, plaster medallions, and Roman glass from Begram; and extraordinary turquoise-encrusted gold jewelry and ornaments from the tombs at Tillya Tepe.

Ancient Afghanistan—standing at the crossroads of major trade routes—was home to some of the most complex civilizations of Asia, where multiple artistic influences were intermingled. This exhibition celebrates this rich heritage and commemorates the heroic rescue of the most precious of Afghanistan's archaeological treasures. Among the highlights are spectacular objects unearthed from four sites: gold vessels from the Bronze Age hoard at Tepe Fullol; architectural elements and sculptures from the Hellenistic city of Aï Khanum; extraordinary Indian-style ivories, Roman glass, and other goods traded along the Silk Road, from the first- through second-century site at Begram, and spectacular turquoise-inlaid gold jewelry and luxury objects from the first-century nomadic tombs at Tillya Tepe.

This exhibition highlights the amazing rediscovery of Silk Road treasures from Central Asia, thought to have been lost during decades of warfare and turmoil in Afghanistan. These masterpieces of the Kabul Museum collection remained hidden for twenty-five years, thanks to the heroism of the Kabul Museum's staff, who had secretly crated them and placed them in a secure bank vault. It was only in 2004 that the crates were opened to reveal that these works had survived intact.

The spectacular arts displayed in these galleries also celebrate the pivotal role played by ancient northern Afghanistan—Bactria in western sources—as a strategic crossroads for trade and cultural exchange between East and West. Its culture reflects contacts with Greece, Iran, Mesopotamia, India, China, and the Eurasian steppes. Bactrian craftsmen absorbed the artistic traditions of these diverse lands and developed their own distinctive style.

The works on view span Afghan history from 2200 B.C. to the second century A.D. and come from four archaeological sites: the Bronze Age site of Tepe Fullol; the Greco-Bactrian city of Aï Khanum, founded by the successors of Alexander the Great, who conquered the region in the fourth century B.C.; the major trading settlement of Begram, which flourished at the heart of the Silk Road in the first and second centuries A.D.; and the roughly contemporary necropolis of Tillya Tepe, where a nomadic chieftain and members of his household were buried with thousands of stunning gold objects and ornaments, many inlaid with turquoise and other semiprecious stones.

The exhibition is made possible in part by Raymond and Beverly Sackler and the National Endowment for the Arts.

The exhibition is organized by the National Geographic Society and the National Gallery of Art, Washington, in association with The Metropolitan Museum of Art, New York, the Asian Art Museum of San Francisco, and the Museum of Fine Arts, Houston.